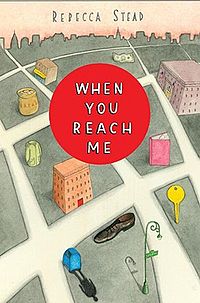 I purchased this book off Amazon to read on my Kindle app and I have been reading it here and there when I had nothing better to do and I finally finished it on Sunday night when I was waiting for the Paul McCartney show to start (incredible show btw). I think I had this book mixed up with another with a similar title when I bought it but I can't recall which book that I thought it was anyways.

I didn't realize when I bought it (since I bought the wrong book ) but "When you Reach me" is actually a young adult novel but it was pleasant enough for a grown up like me to read as well. It follows a young woman named Miranda who lives in New York City. She finds a series of strange notes that seem to come from a time traveller. This is one of the major plot points, but the book spends as much time discussing her day to day life, her struggles to get along with friends and her interactions with her family and other people in the neighbourhood.

This is not really a book I would recommend to my adult friends, but I think it is something that maybe its intended audience would like. I think the 12 year old girl inside me enjoyed it a lot more than the 34 year old on the outside.