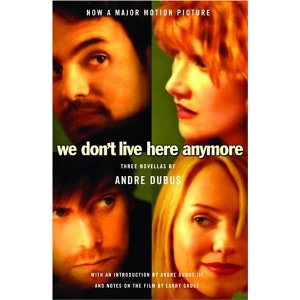 I am rededicated and determined to meet my goal this year. Now that I have finished this book I have beaten my count for the last two years (CBR2 I read this many books but the deadline was Oct 31 and I only had 41 then kept reading until December 31). I also hit up the bookstore (I am still fighting with the library since they want to charge me for a book I did not damage) and I purchased 3 books that I am very excited to read. That only leaves 4 after that. I will be taking transit to work again which means a potential of two extra hours of reading time. I just have to focus on it, turn off the TV or games and just dive into a good book. I am still planning to do CBR5 but I think I will just do a half so that I can take it easy and also tackle a few longer books that I have on my shelf. Anyhoo, on to the review.

"We Don't Live Here Anymore" by Andre Dubus is another book that I found as I was packing up my things and deciding which books that I would donate and which to keep. I purchased this one for a bargain at a book sale at the library (jerks). I remember liking the movie, but when I first tried to read this book I just couldn't get into it. I decided to give it another go rather than just giving it away and I am glad that I did because I really enjoyed it.

This book contains three novellas, but they all contain the same cast of characters so really feel like a cohesive novel rather than a collection. The first story is the one that contains most of the movie plot, it introduces us to Hank, Edith, Jack and Terry, two married couples that are also very close friends. It is about monogamy, love, marriage and commitment. Several of those terms really mean the same thing, but then again they don't. This story is told from the point of view of Jack as he tries to decide if he can continue in a marriage that he feels has lost the love contained within.

The second story is told from the point of view of Edith and takes place about three years after the first. It tells us of Edith and a lover that she takes on after her marriage has taken on a new definition. It is a touching story about faith, love and one's life path. Edith's lover is an older man, who makes a radical life change before meeting her, and he ends up teaching her that life is too short to settle for less than you deserve.

The final story is told from the point of view of Hank, again a few years down the road from the second story. Hank is an interesting character, the stereotypical womanizing college professor in some ways but there is more to him than that. It seems fair when he says that he has tried dating women his own age, but in the small town they live in, they just don't share the same interests, mainly literary, that Hank values. He is a writer and many women have felt that he puts that above all else in his life. In this tale, Hank comes to learn that as we age, our bodies deteriorate even if we try to maintain optimum physical shape. The reality is that college girls will not find him irresistible forever and he doesn't want to end up alone. Hank gets a piece of troubling news from his current lover, something that today would not really be all that scandalous, but these stories are set in the early 70s. This news forces him to take stock of his life and make some changes.

All in all a great book about relationships, excellently written. If only my review could be as eloquent, but what can you do.