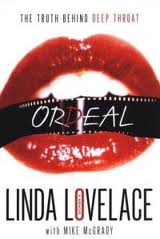 I don't know why I thought this would be a good book to read. Temporary insanity I guess? I generally like to read stories of survival, of triumph over adversity so maybe that was why. Maybe because it is being made into a movie, I usually like to read books before the movie comes out, but having read this there is no way I am going to see the movie.

I do really feel for Linda, I am sure her life must have been awful with Chuck and I am sure it must have stayed difficult as everywhere she went she was recognized from her work. Reading about some of the things that she was forced to do made me quite upset. Having said that, I do not agree with some of her personal views, mainly that anyone who doesn't like straight up vanilla sex is a bad person. But I do understand that what she had been through would have made her judge anyone that she would associate with the many, many people who abused her and used her.

I think from now on I will be much more careful with the kinds of books I choose, I just don't need to know some things. I long ago stopped watching horror movies and movies full of violence because it is just not the kind of things that I want in my head.