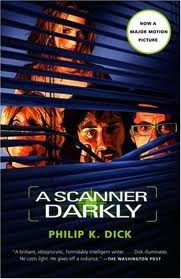 This book has been on my to read list for some time so when I was out shopping at Chapters (they reeled me in with a card that got me savings from $5-$50 if I spent $50, guess how much I saved) I decided to pick this one up. I really enjoyed "Do Androids Dream of Electric Sheep" so I was excited to read another Philip K. Dick novel and I wasn't disappointed.

"A Scanner Darkly" is set in "the future" well it was when it was written. This book was written the year I was born and set the year before I graduated High School. It is hard to say what it is "about" per say, drugs and conspiracies maybe? It is set in a world where you are either drug user or a "straight". The drug that most of the users are addicted to is called Substance D, Slow Death or Death. It is a drug that apparently is grown and has only one source. Our protagonist, Bob Arctor is an undercover narcotics agent seeking to take down a big time supplier and maybe one day even take down Substance D from the top.

The problems with being an undercover agent are many. One is that in order to be a convincing agent, one must actually use the drugs. This topic has been covered in many such a tale, as it must ring true to life as well. In the world of this book it is made further complicated by the "Scramble Suits" that an agent must wear when meeting with the other agents and supervisors in order to maintain their cover as much as possible. Early on in the book, Arctor is assigned to spy on himself and his own household where he has a circle of users who are both brilliant but ineffective in accomplishing much due to their own drug use.

Spying on oneself, living a double life and taking drugs that have an extreme effect on the brain do take their toll on Arctor and it is hard for him to know who is real and what is what. One of his associates is a young woman named Donna, they have an almost romantic type of relationship but she always seems to pull away when he tries to take things to the next level. Arctor is trying to use Donna as well to obtain her sources in order to get a bust. Donna's motivations are unclear, is she just another drug user or is there more to her?

I really enjoyed this book, although I felt that the ending was rushed, and could have perhaps been elaborated on further in order to make the entire story stronger. But overall I would still recommend reading this book. Reading the Wiki article it seems that much of this book was based on Dick's life experiences. The last page of the book is some dedications to people he knew that were inspirations for the book and their fates are quite sad. I look forward to reading more of Dick's works in CBR5!!