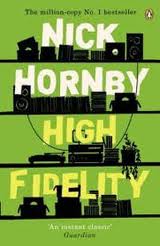 “High Fidelity” is the third book that I have read by Nick Hornby and it will not be the last. As mentioned in my reviews for “Juliet Naked” and “About a Boy”, I find his writing style comfortable and easily read. His characters are relatable and although not obviously likeable, I find them to be so.

“High Fidelity” was the author’s first novel, and a rather good one in my opinion. I have seen the movie quite a few times as well and was impressed in how the book held up to my memory of the movie. Wikipedia also tells me that it was a musical in 2006, that would have been disasterrific to see. As in the movie, the book centers around Rob Fleming who owns a fairly unsuccessful London record store. As the book opens, his girlfriend Laura has just left him and he proceeds to tell us his top five heartbreaks and how Laura should have gotten to him sooner if she really wanted to make the list.

Making these lists is a habit for Rob and his two buddies that work at his shop with him. It is one way to pass the time since there are not a lot of customers to deal with. They are quite OCD about music and tend to judge each other and others based on their preferences.

Although music factors in quite a lot in this book, it is more about relationships. Rob is having trouble keeping things together after his breakup with Laura. He is in his mid thirties, getting closer to 40 every day and feels that he has not accomplished enough, that his life lacks substance. Does he really love Laura all that much, or the completeness that her presence in his life will offer? The answer depends I guess on how cynical you are.

I really loved something that is said near the beginning of the book and echoed through at the end. Without quoting, it goes along the lines of this: Am I miserable because my life is crap and so I can relate to sad music, or am I miserable because of said music and so I aim to mirror that in my life. Here is part of the quote also: "People worry about kids playing with guns, and teenagers watching violent videos; we are scared that some sort of culture of violence will take them over. Nobody worries about kids listening to thousands - literally thousands - of songs about broken hearts and rejection and pain and misery and loss." I thought this was apt.

Check out this book if you haven't already, you won't regret it.