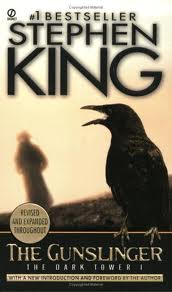 So I am taking on the Dark Tower series. As an avid King fan I am surprised that I have not read them sooner but the e-reader that youthfulzombie gave me has the books on there so what better time than the present to get started. I have a few library books to read as well so I might not be reading them back to back, but you never know.

In any case, The Gunslinger is the inaugural tale in the series. It takes place in a world that is not our own, but seems to share a few things in common with ours in a mysterious way. It is a world that is not what it once was, the phrase that is apparently often used through the series is that the "world has moved on". We meet the mysterious Roland right away, he is the titular Gunslinger and is apparently the last of his kind. He is following a mysterious man in black and seems to be seeking revenge.

This tale was a bit hard to get into at first, but now I have found myself a bit sucked in and looking forward to seeing where this story goes.
Posted by Unknown at 9:13 PM