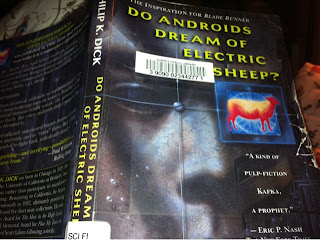 I decided to read this book after reading a post on Pajiba about movies that would have been better with a different ending. I can't seem to find that post or remember the exact title, but in any case it lead me to this book and I enjoyed it very much and I am now looking forward to watching my Director's cut of Bladerunner as I think it has the better ending that Pajiba was referring to. I have never seen any version of Bladerunner but I had vaguely heard of it and knew it was something to do with a bounty hunter and androids .

"Do Androids Dream of Electric Sheep?" is the story of a world ravaged by World War Terminus. The planet Earth is mostly abandoned since most have gone off to colonies on Mars where they are all promised their own personal android assistant (slave). Back on earth we meet Rick Deckard who is a bounty hunter working for the San Francisco police. Sometimes the androids tire of slaving for the humans and they kill them and flee back to Earth.

In this world there are very few animals and so owning an animal is a large status symbol and preserving any animal life is paramount. They all follow a mysterious man named Mercer, they hook themselves up to a device called an empathy box in order to visit Mercer and experience his plight. They seem to gain a group consciousness from this experience and it enables them to live in positive and peaceful ways.

When we first meet Rick he is fairly down. His wife is depressed, he is unable to purchase a real animal and has to make do with his electric sheep. He is the low bounty hunter on the totem pole and so his hopes to purchase an animal are few. He is quite obsessed with animals, they have a guidebook with prices and lists of extinct animals and he turns to it quite often. When a superior bounty hunter is severely injured by a new type of android, Rick is asked to take on the task of taking out 6 more androids that are on the loose.

He is first asked to meet with the manufacturers of the androids at their Earth headquarters. The police want to make sure that their test to determine if someone is an android is accurate. He then meets Rachael Rosen who he tests and who does play a substantial role in the rest of the novel.

It is mainly a book about empathy, and survival and what constitutes a life. Androids in this book are almost indistinguishable from humans, and physically can only be detected post mortem with bone marrow tests. The bounty hunters use mainly empathy response tests to determine if someone is an android as that is one thing that they seem to lack.

It was interesting to read a piece of Science Fiction from 1968. It is amusing that the author thought there would still be cathode ray tube TVs and that we would still hang up phones, and that there would be no cell phones either. Also it is referenced in the book itself that on Mars a big source of entertainment is old science fiction novels, they like to laugh at the inaccuracies as well.

All in all a pretty good read. I don't read much science fiction, but this book made me want to possibly reconsider that.